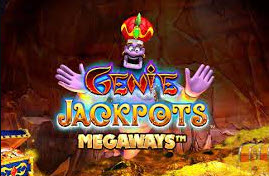 Read our review of the Blueprint Gaming-developed Genie Jackpots Megaways video slot or play the demo version for free right now! Click here to go to the website.

The online slot game Genie Jackpots Megaways was developed by the gaming giant Blueprint Gaming. It consists of six reel sets, a variable number of rows, and as many as 25,000 different ways for players to win. Win spins, wild multiplier reels, as well as four distinct bonus-spin functions with locking wild symbols, increasing multipliers, and sticky-win re-spins are all part of the game's assortment of bonus options.

Blueprint Gaming's Genie Jackpots Megaways is an entertaining and thrilling video slot game that can be played online. It is a reimagining of the classic Genie Jackpots online slot, but with over 15,000 different ways to win, the stakes have been raised significantly. This game has a total of nine different bonuses that may be activated by the player. These bonus features include bonus spins, re-spins, as well as expanding wilds.

Blueprint Gaming has distributed many Genie Jackpots online slot games featuring this unique character since the game's inception. The Genie makes another appearance in this jovial shenanigan, this time appearing off to the corner of the reels to provide the fortunate player with a plethora of extra features while also thwacking the reel set with his enchanted hammer. And although Blueprint has definitely granted him a personal style that's all his own, it is highly noticeable that he shares his mannerisms with the merry blue dude from Disney's Aladdin. In addition, he is purple with a bright red headscarf that seems to be an icon in and of its own.

The remaining aspects of the design are quite pleasing to the eye. The reels provide the impression of being suspended in the Persian sky at night against a backdrop of purple clouds as well as flashing stars. They are located well above the treasure vault where Genie's lights are hidden. The 9 to Ace royal symbols are rendered in a typeface styled by Arabic calligraphy and are clothed in vibrant jewel tones. They are a wonderful complement to the rest of the vivid cartoon-like design.

This recounting of the story of Aladdin is tied to all the symbols that appear in the top paytable, including a set of crossed scimitars, the gorgeous turban worn by the Genie, as well as a treasure chest that is overflowing with gold and jewels. In addition to that, there is a symbol for the Genie Jackpots bonus game, as well as the colorful Genie wild. Although there's nothing covert about this genie, who yells “Shazam!” before repeatedly hitting the reels with a hammer, this online slot is a great deal of fun; there's always something happening to maintain your focus on the reels. In addition, there are plenty of opportunities to win prizes. To put the finishing touches on everything, there is a piece of contemporary Arabic music that completely submerses you in this mysterious and magical Middle Eastern environment.

The Genie Jackpots Megaways Game: How to Play

Just a few short reminders before you get started playing:

It is quite clear that Blueprint developed the user interface with mobile play in mind; the controls are conveniently located on the edges of the reel set rather than directly underneath them. It maintains all game options and details in a centralized location, making it simple to access them regardless of the device you use to play the game.

We strongly suggest that you have a look at the paytable before you hit the button that starts the spin. The paytable includes details on the multiplier payments that are offered, the high paytable symbols that you should keep an eye out for, and how the extra features are activated. You will also discover helpful tips on how to keep an eye out for a win on the Megaways. After you have messed about with the settings for a while, it is time to start playing Genie Jackpots Megaways by clicking the green spin button that is located to the right of the reels.

RTP for the Genie Jackpots Megaways

The return to player percentage, often known as the RTP, for Genie Jackpots Megaways online slot, is 96.52 percent. This payout percentage will tell you, on average, the amount of money the game will pay out for each one hundred dollars that are wagered. However, this is just a potential percentage; thus, you need to keep in mind that game creators go through dozens of spins in order to get at this amount, and your own personal gameplay experience may vary from what is described here.

Volatility is a measure of both the risk that is inherent in playing a video slot and the potential rewards that may be gotten from playing that slot machine. A continuous stream of wins with low values from the basic game characterizes games with low volatility and total rewards that are typically lower even in the bonus rounds. High volatility slots, such as Genie Jackpots Megaways, flip the script and provide large prizes from bonus functions like choosing and winning a wheel of fortune and bonus spins. These features may be found in high volatility slot machines.

The Strategy for Winning

There is a significant difference between payline slots and multiways pay slots. Instead of needing to hit matching symbols in a line that is specifically designated as a winner, Megaways slots give out rewards if you land three or more symbols on reels that are adjacent to one another. Wins are paid out left to right, beginning with the reel on the far left, and a combination is only considered to be a winner if the symbols appear on reels that are in sequential order.

In addition to the Genie symbol, you may also uncover the treasure box, which awards a 5x multiplier if you manage to land 6 of them, while the turban and the crossed scimitars provide a 2.5x multiplier for a complete house of symbols. Although the winnings in the standard game aren't very large, this game has always been about the bonus spins and the many ways in which they may be modified.

Bonus Functions and Prizes for the Genie Jackpots Megaways

The extra features of Genie Jackpots are almost bursting at the seams. During the regular gameplay, you have the opportunity to activate one of the following Genie Power Spins:

You will trigger the free spins bonus round when the player lands at least three bonus icons anywhere on the game board. Depending on how many bonus symbols you manage to get, you will either earn 10 or 20 free spins to use on the slot machine. You may win more bonus spins if you acquire two bonus symbols in addition to the ones you already have.

During the course of the free spins, the following extra bonus features will become active:

Any tablet, smartphone, or personal computer may be used to play Genie Jackpots Megaways. It is not necessary to install any software in order to play the game since it may be loaded simply from your internet browser. You will enjoy the same fantastic gaming experience with outstanding visuals and a full host of added features no matter what platform you play on. This is consistent across all platforms.

Demo play of the Genie Jackpots slot machine is yet another helpful tool for determining whether it is worthwhile to play this particular slot. It's a fantastic opportunity to try out all the extra action and get a feel for the Megaways gaming engine without taking any chances at all. In point of fact, if you use the Wish function, you'll have a better chance of securing some Genie bonus spins that come with some fantastic additional benefits.

Enjoying free-play online slots is not only fun, but it's also a terrific method to test out the software that an online casino has to offer. If you prefer playing slots developed by Blueprint, Microgaming, or NetEnt in the preview mode, you should keep an eye out for games developed by these companies at the casino sites you are considering playing at. And learning how the features and basic gameplay work may help you make a really informed bet when it comes to picking video slots for actual cash play. This will prevent you from making the costly error of simply diving in feet first, which is one of the most common ways that people lose their money.

Demo play slot machines must be your first point of contact before you choose to gamble, especially if you are a complete newcomer to the game of slots. As a matter of fact, you may even discover that bragging rights and virtual awards are sufficient compensation for your efforts. Playing the Genie Jackpots slot game in free-play mode eliminates the need to register for a casino account or make a deposit, so if you don't mind playing for play money, you should certainly give this incredible game a try on our site.

Blueprint has seen a lot of success with the Genie character they created; as a result, they have decided to use him once again in their Megaways slot. And Blueprint has definitely stepped it up a notch from the last slot machine, which had 5 reels and 20 paylines. This slot machine has even more possibilities than its previous version, Genie Jackpots, because instead of just having mystery wins and also the magic carpet bonus round, as well as Power, Spins with free various features, Genie Jackpots Megaways allows players to choose from four different main game modifiers and four different Power Spins. This gives this slot machine even more possibility than its previous versions.

When you click on this button, you will be sent to the website of an independent third-party affiliate, an actual cash casino. Even though we make an effort to pair games with casinos that offer them, we strongly recommend that you cross-check the online slot selection on the casino's site before signing up for an account or making a payment.

Yes, you can enjoy the free play mode of the Genie Jackpots Megaways slot machine right here on our website.

If you play Genie Jackpots Megaways at an online casino that is hosted by Blueprint Gaming and register an account there, you have the opportunity to win real money.

It is expected that the long-term average payout will be 96.52 percent.

If you are lucky enough to land three bonus symbols, you will be rewarded with up to 20 free spins. During this round, you will also have access to a total of four distinct bonuses, one of which being more wilds.