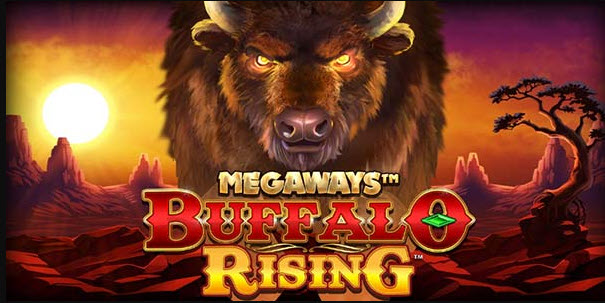 Let's be frank: we have seen the idea behind this online video slot in other forms of gambling entertainment before. Nevertheless, it is among the companies that have carried it out in the most successful manner conceivable. Blueprint Gaming brings the visually stunning online slot machine known as Buffalo to you and has a number of elements that are both fun and interactive from the get-go. However, Blueprint Gaming is well-known in the gaming industry for supplying the industry with items of high quality. You will find yourself in the midst of a mountainous location as you play Buffalo Rising Megaways. The sun will be blazing down on your body as you keep an eye out for the presence of local animals.

The Buffalo Rising Megaways slot machine has a configuration that is often associated with the Megaways gaming engine. This layout consists of 6 reels with between 2 and 7 rows, and it is the general layout that is used. And while we're on the subject of those Megaways, you should know that while this feature is active, there are a potential 117,649 distinct ways for you to win. The slot game may be played on any device, and it gives you the option of placing bets ranging from 0.10 to 10 euros or pounds every spin. Compared to some of Blueprint Gaming's other Megaways games, this one has a variety that is considerably less, but it still gives you a respectable number of options to choose from.

The graphic aspect of this game is one of the many things that make it stand out. Playing card symbols, ranging from the green 9 all the way up to the purple A, are shown on the reels, which are set against a backdrop of a mountainous landscape and a beautiful sky in the distance. These are followed by images of a huge moose, a wolf, and a grizzly bear, respectively. It should come as no surprise that the buffalo serves as the game's maximum paying standard symbol, providing you with a payout equal to fifty times your original wager for a combination of five of a kind. In addition to this, Buffalo Rising Megaways provides you with access to its own unique wild symbol. This is the emblem that takes the form of a buffalo and is shown on a sign with the word “WILD” written in lowercase letters beneath it. Because it is a wild symbol, it may substitute for any of the other standard symbols found inside the slot machine, making it much simpler for you to form winning combos. The scatter symbol is the only one that this one cannot substitute for in the slot machine.

As soon as you start putting together winning combos in Buffalo Rising Megaways, you'll notice the first of the game's features for the first time. You have to understand that each successful combination is a component of a Reaction, and this causes Cascading Symbols to become active in the game. This results in the disappearance of the symbols that contributed to the win from the reels, making room for new symbols to fill in the spaces left behind. In the event that another victory occurs after the previous one, the procedure is repeated. As long as further wins can be created from the cascading icons, this reaction mechanism will continue to take place.

In addition to this, the game offers an additional bonus in the form of a Mystery Symbol. This one is shown as the sun going down over the rugged terrain. The moment it enters the field of vision on any reel and in any position, it immediately transforms into a single symbol that is used throughout all locations. The only one that it cannot change is the game's scatter icon, which is the only one that it cannot change into. Because it may combine many different settings into a single, unified configuration, this symbol can be of great help in a variety of contexts.

When you look at the scatter icon of Buffalo Rising Megaways, you will see that it takes the form of the lilac gemstone. Scatter symbols have the ability to appear anywhere on the reels, and when four of these symbols are in view, they will trigger the Bonus Spins mode of the game. Scatters may appear in any position. You will be granted an additional number of free spins to play through the bonus round for each additional scatter that is visible when the triggering of the round happens. You will have the opportunity to select one of four distinct Bonus Spins rounds, each of which has a different amount of volatility before the game begins. The following presentation types are available for these:

In the round of Bonus Spins, the Infinite Win Multiplier will rise with each successful action, and the maximum level that can be achieved with this multiplier is unlimited.

The Buffalo Bonus Bet option is the last component of this video slot that deserves to be discussed because of its significance. You may use this feature by pressing the button that is located to the left of the reels. If you make use of it, you will be given the opportunity to purchase entry into the bonus round of free spins at a cost equal to one hundred times your original wager.

Because there are so many different outcomes that are possible inside this slot game, it is difficult to think of any other word to describe it but fantastic. It is imperative that you play Buffalo Rising Megaways if you are a follower of Blueprint's Megaways series. It is captivating to look at, and the score, which is creepy in places, is an excellent complement to the native American-inspired theme. As is customary, the Megaways machine also churns out a ton of action, each of which has the potential to result in huge payouts. It has a medium to a high level of unpredictability and offers a maximum win of up to 10,000 times the amount of your entire bet.