>>Play on Wrath of Medusa Slot

Specifics about Wrath of Medusa Slot

The theme “Greek mythology” consists of extraordinary creatures that make today's Hollywood superheroes appear so weak. But, despite that, there's just a single particular dignitary that has at all times impressed us above every other else; and that is Medusa.

Medusa in question, there are lots of unique things about this female character. However, the fact that a mere look to her eyes can transform a complete man into stone is a thing that certainly makes an impression. The casino giants, Rival gaming came up in a new dimension at this dignitary in Wrath of Medusa, a genuinely spectacular video slot machine. 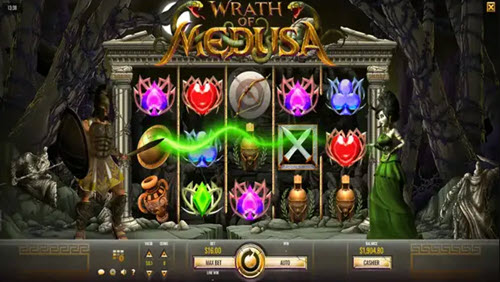 Wrath of Medusa slot kicks off with an introduction movie clip that opens you up to a field of battle littered with soldiers transformed to stone; at the same time, Medusa contemplates the whole thing from the clifftop.

Open up the Wrath of Medusa slot & you'll get to find out its reels rest in the middle of pillars of an ancient Greek temple while having the brave Perseus on the left & Medusa on the opposite side to this. We could figure out a couple of unlucky army troupes changed to stone; likewise, the music & sound effects contribute a pleasant minor detail to the mysterious atmosphere.

Right in the game, we have several moving pictures that play in winning combos & different events. All these are in all respects enjoyable to watch.

Wrath of Medusa slot features three rows, five reels, accompanied by 20 non-adjustable pay-lines. You can line up the winning combos in the standard style; all you'd require is three identical characters in succession starting from left to right before you can be eligible for a jackpot reward.

Right in the play-scene, you'd have 12 different characters beginning from the low-paying card combinations, then to soldiers' stuff, for instance, daggers, bows, swords, helmets, shields, including a handful of temple-related stuff such as serpents, shekels, & urns.

The most significant winnings to expect of this slot is 500x a player's bet value, during which the RTP rate is quite a bit not up to the industry average specified only at 93.86%.

At first glance, the very first hint that can cross your mind of a woman with snakes rather than hair is most likely that: “She's Wild!”. Well, in this Wrath of Medusa slot, Medusa itself stands as the Wild symbol, & anytime she makes up her mind to demonstrate her inherent potentials, she has the propensity to transform a complete reel to an Expanding Wild at random.

Better still, this addition can result in lining up winning combos most of the time. Likewise, the moving pictures that flow along with it are advantageous also.

Perseus is a superstar that, in the long run, does everything in its best capacity to behead Medusa inside Greek mythology. Perseus is another powerful character you can find in this slot, while you have his portrait represented as the Scatter symbol. Also, perhaps you secure a minimum of 3 of these symbols in view, you can get some bonus Spins.

While the bonus spins feature is active, there's another Wild entirely. Perseus substituted Medusa in that role & at any time this character appears, it becomes Sticky, then offers a re-spin feature.

Wrath of Medusa slot is a quality game publish, an initiative of Rival gaming. This renowned developer accounts for a lot of experience in the gambling sector & known for delivering reliable software.

Wrath of Medusa slot is designed with excellent visuals. Likewise, the background music is top-notch, thereby creating an enveloping game round for users.

On the other hand, the relatively low RTP rate may likely discourage users, even though the figure does not necessarily give the impression that a player can win or lose in the course of running the game.

In a nutshell, the game is worth giving a shot, thumbs up to the spectacular layout, that's enough to cause the gameplay enjoyable, notwithstanding the result.

>>Play on Wrath of Medusa Slot

Smoking Gun Slot Machine Review (Rival Gaming) –  60 Free Spins  This is a typical Wild West story with an excellent and amazing graphics. The disappointing thing is that the...

Jack Frost Slot Machine (Rival Gaming) This is an amazing game by Rival Gaming, and it’s about a battle for control over the weather. There is a battle between Harold...

Arabian Tales Slots Review (Rival) One of the slot machine that has rival gaming as its software developer is Arabian Tales which is a game that encapsulates an Arab country....