Swindle All the Way 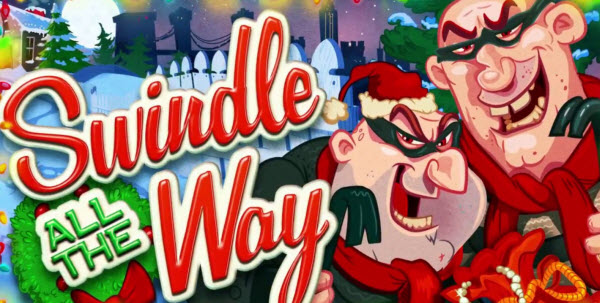 >>Play on Swindle All the Way

Real Time Gaming powers this online video slot game. The game features twenty-five win lines, five classic reels, wild substitutions, scatter icons, multipliers, free game options, and bonus options. Owing to the long existence of Real Time Gaming in the gaming market, this Swindle All the Way slot is well-known by players from different parts of the world. The gameplay of the game is fair, and it has reasonable RTP value coupled with several progressive jackpots, all these make this more exciting to play.

The graphic design of this game is very enticing as it features colorful brim lights with snow falling animations. The minimum bet set for this RTG game is 0.25 per spin, and the winnings obtained in the game are multiplied by the bet value for each line. The usual icons of the game are the letters and figure A, K, Q, J, 9 and 10, these icons forms winning combinations whenever they appear on the reels.

The robbers depict the wild icon of the game; these robbers are capable of substituting for all other icons in the game except for scatters, and they offer a multiplier value that ranges from 10x to 2,500x.

The scatter icon is depicted by the logo of the game, and it awards a multiplier of 2x, 3x, or 250x the entire bet when it appears on the third, fourth, or fifth reels at the same time and the free spins feature is launched immediately after this.

It is possible to be given 1x multiplier and three free spins at one end and get 60 free spins at the other end; this will multiply each of your winnings by a multiplier of 33x. You might be lucky enough to obtain this winning combo as it is quite rewarding, you can also land three or more scatter icons while in the free game option for an additional 10 free spins.

Real Time Gaming did a fantastic work in this slot as it offers a lot of features to players. Aside from the features mentioned above, the game has two progressive jackpots that players can win when a random spin ends.

The game is playable on both desktop and mobile devices, and it ensures fair play throughout the game section. This slot game is fully licensed, and different certification companies certify it, so be assured of safe play when playing Swindle All the Way slot game.