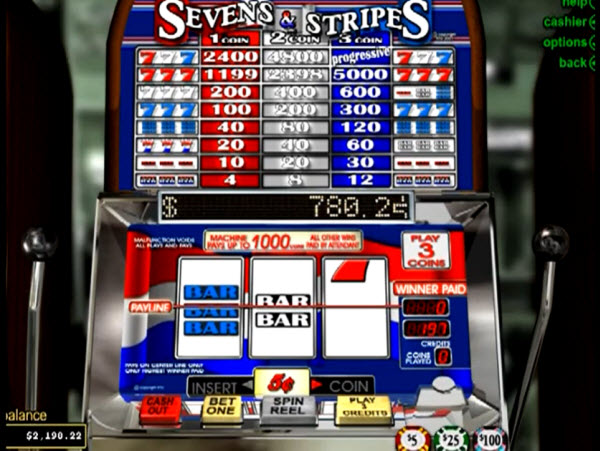 >>Play on Sevens and Stripes

Sevens and Stripes slot is an online video slot that runs with Real Time Gaming software. This slot game features lots of bonuses for Americans including high paying icons, progressive jackpot, multipliers and many more.

This is another RTG slot game, which gives an opportunity of winning huge prizes to Americans. Starting with the red, blue and white icons, the game has a retro feeling of a traditional gameplay with a single win line and three reels. Also in the game are special icons that entices America gamblers and several bars of with 3 colors of lucky 7’s and 3.

This is an American game that is filled with loads of offers, the reels of this game can only by spun by selecting the option of three coins per spin and this also results in winning progressive jackpots that gives a coin value of about ten thousand. Lining up every one of the blue, red and white 7’s respectively results in the activation of this progressive jackpot.

The game has many other icons that can be matched to obtain form a winning combo. One, two and three bars all gives prizes and combining any of these three will result in a win of 4 coins and 12 coins.

America is not only known as the land of the brave but also known as the “Land of the Free” and this is the reason behind the free game option that Real Time Gaming provided in this slot game. This game is available for players to play free of charge before trying to play for real cash.

Real Time Gaming developed this video slot purposely to honor the loyal citizens of America and that is why it can be played for free at any period of time. This Sevens and Simple Stripes slot is a retro-styled game and it has an interesting gameplay.