This game was considered as one of the luckiest out of the games inspired by the Ancient China. 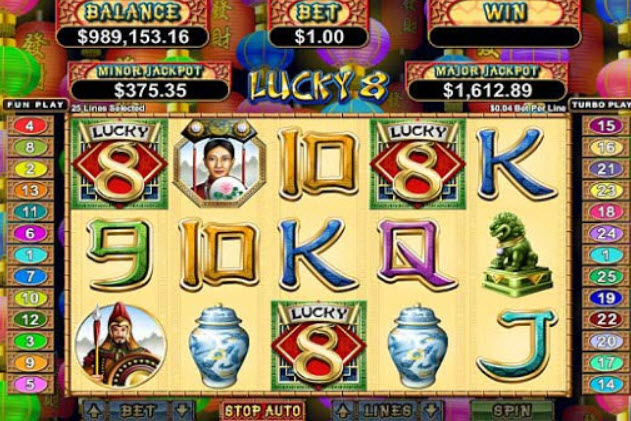 Realtime Gaming has carefully taken their time to ensure a better gameplay on this slot. What you are to do on this game is to come to the rescue of a rich merchant that the daughter has been kidnapped for a while by a wicked emperor. Your mission on this slot is to kill the emperors and his warriors such that they won't be able to escape. After you might have achieved all these, you will be well rewarded. The Emperor is the wild symbol and it can be used for the Win-Win Feature, Free Games Feature, and the Minor and Major progressive jackpots.

The spin-stakes starts from the 0.01, and with this little amount, you can enjoy all that Lucky 8 have to offer the players.

This 5 x 3 reel slot is going to give you the chance to access the typical treasures of Ancient China. There are lots of beautiful dragons that can pay you up to 25 lines and these include the Mang Vases and the Jade Dragons

Players will be greatly rewarded with each of the journeys they encounter as they can get up to 288 coins when they can get Jade Dragons or Ming Vases. This same prize will be given to you when you can kill the warriors of the emperors. There is no need to give up as 888 coins can be awarded to you.

After you might have rescued the kidnapped daughter, there is every tendency that you face the wrath of the Emperor. The fortunate thing is that as the Emperor turns wild, it will help you in getting better wins. There are lots of wild emperors on the reels and they can be in the multiples of 2x, 3x, and 8x. The scatter symbols can as well ensure you get 2 better ways of making wins.

The slot may get you awarded with 88x of the total amount you spent on the bet, 8 free games can as well be triggered in the Free Games feature. After the free games must have been awarded to you, then a bonus multiplier will be awarded which can fetch you up to 2x, 3x, 5x and 8x of the amount you placed on the bet. Also there is a minor and major progressive jackpot which is $853 and $4,679 respectively.

This game can be played using your real money. The minimum amount that you can deposit is $20 and provision is made for players with low and high stakes. These games include Slotocash and Slotastic

The Merchant’s daughter life is at stake, but then you can choose the spin-stake so that you will know how well you can rescue her. The paylines ranges from 1 to 25 and the coin ranges from 0.01 to 0.25 coins.

This slot is so amazing and is all about an epic rescue with the inclusion of big prizes and some other fantastic features.