Have you ever seen a Dragon breathe out fire?

Fire Dragon is based on the actual movie, a slot game filled with excitement and thrill. 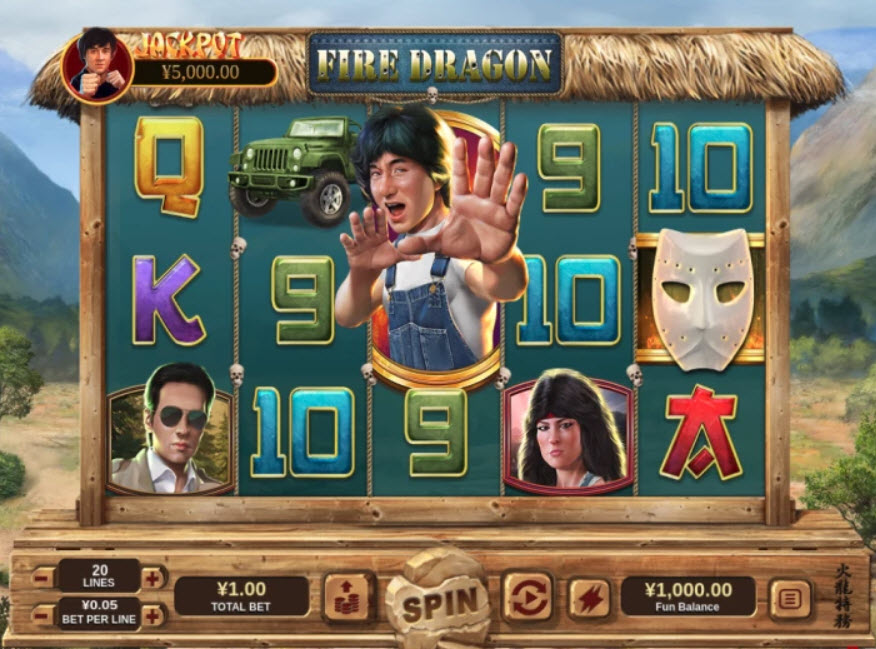 As part of RealTime Gaming's Jackie Chan series, this slot deserves its name. It comes after the Fantasy Mission Force slot game, and the Eagle Shadow Fist slot game, all based off movies that Jackie Chan acted in. Fire Dragon slot is based off the Fire Dragon movie in which a team is sent to bring back a file from the enemy's camo at the Women Warriors island. This file could actually help in ending the war but the task is more difficult than intended because they have a traitor in their group.

We have no doubt that there will be as much action in this slot as in the other two games in the series. This game is not yet available at RealTime Gaming online casinos but we expect to see the most thrilling experiences like car chases and martial arts that would lead to rewarding wins.

We do not know what the symbols look like yet but we are going to base ourselves off the other two Jackie Chan games in the series. We believe that players would see actors and actual scenes from the movie and these ones would be paired with cards with appropriate designs on them. All we are really sure of is the fact that the Wild (Jackie) would be able to replace all of the symbols in the game except the Scatter which will be the Ninja Mask.

You have 20 variable paylines in Fire Dragon. So you can choose which ones you are activating. We recommend playing with all of them activated though. Symbols with less value with give pay once you have at least three of them. But those with more value will just need to double so as to give you amazing rewards. They will pay from left to right on an active payline. Usually, all games begin with the reel that is furthest left.

The actual action will start when you will see three or more Scatters on the reel simultaneously. You will witness ninjas going down ropes so as to there flash bombs. They give you 10 Amazon free games. This might not sound like a lot but you can keep this feature going and keep winning. Progressive jackpots that can be randomly triggered, something that you will see in the whole series could make you win really big. The initial value is $5,009 but it could actually be much more when you win it.

We don't know what the payout symbols look like yet. What we do know is that you will be able to win max 50,000x per bet line at the Fire Dragon slot game. You might win if you are a criminal, but being a good guy will be much more rewarding.

A lot of Jackie Chan fans are anxiously waiting for this and will party when this slot game finally arrives. We believe from the previous games in the series that the graphics and sound should be pleasing. We don't really expect innovation with the special features. But we expect it to be an action filled game we will love.