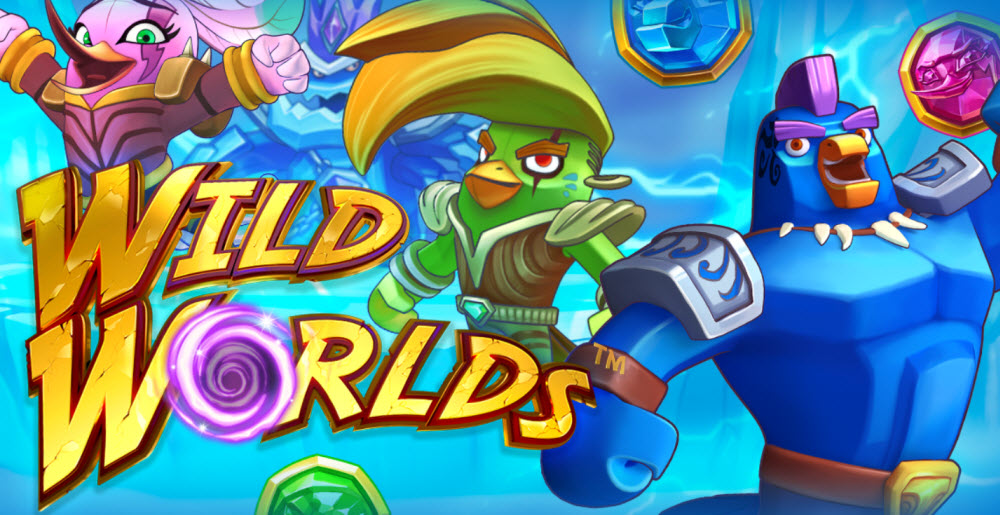 Wild World is a NetEnt powered online video slot. The slot features five reels, five rows, a cluster payline and a bet range of 0.20 to 400 EUR.

Wild World is a NetEnt 5×5 cluster slot, as a software developer, NetEnt focuses significantly on slots games that entertain players. Wild World slot can be played on all devices and it has a bet range of 0.02 to €400 per spin, and it is inspired by superhero comic books. Wild World is a brightly colored slot that make use of an Avalanche feature, this feature offers a winning combination of at least three matching symbols in a row and these symbols are substituted with new symbols, thus provides a chain reaction that might end up in repeated wins. The symbols that are found on the reels comprises of low-medium value, blue, purple and green gems market with lightning-bolts, waves, beaks and feathers of the superheroes. Also, there is a single high win symbol and a wild, the two symbols worth 100x the value of your stake if you happen to land 5 of its kind.

Wild World’s slot is a game with many features. In the base game of this slot, the Destroy feature can activate at random; then, it follows a dead spin. All symbols except scatter will be removed from the reels. After this, new symbols are added to the reels and this will increase your potential of obtaining winning combinations. The Hero symbol helps you land winning combinations in the base game and it changes every other symbol into wilds. The main action commences as soon as you land three scatter symbols at any place on the reels, this will instigate a bonus with eight free spins. The bonus has 3 levels, and each level is made up of a distinct feature, the Hero Wild feature is seen throughout the gameplay. The only way you can move forward in the game is by defeating the monsters in the game with the aid of Hero Special Attacks and Hero Attacks.

Two types of alien monsters can be found in Wild Worlds, these include:

The feathered superheroes unleashed their superpowers to battle the monsters, all winning combinations comprise of Hero symbols, which cause damage to the monsters and charge the corresponding Hero meter stationed below each of the superheroes. If the meter gets filled, a Hero Special Attack will be carried out with damage of several degrees, depending on the hero striking the monsters,

Our Verdict on Wild Worlds (NetEnt)

To some extent, Wild World is a complicated slot, though it is more confusing theoretically than practically. The free spins bonus has a steep learning curve, and the first few rounds might turn out to be offensive for many gamblers. With no doubt, this slot is confusing at first, and it is not a kind of slot you can leave on auto-spin while you go do something else. This slot is attention-demanding and it makes you feel engaged.