The Grand Spinn Slot was developed by Net Entertainment and comes in a progressive video slot jackpot of 3 rows and 3 reels. 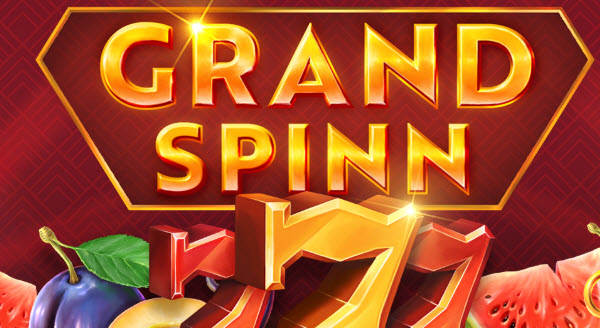 It comes with an in-built Nudge feature, 3 jackpots that are fixed which are the Mini, Midi, and the Mega. In addition, it included a multiplier wild. It has a hood that is finished with gold and red graphics and it doesn’t end there, they are a sharp as nails.

In the main game, there is jackpot up for grabs that is worth 7,040x the players stake. Running this slot on your mobile device doesn’t reduce its quality one bit as it regains its stunning look even on mobile. On mobile devices of all kind and computers, the bet per spin begins at £0.20 and goes up to £200.

This game comes as a single line slot with majority of its action occurring at the center of the reel. When players hit three of a kind symbols, payouts can be made.

The Nudge feature of this game gets triggered when there is a winning combination and runs out as soon as players run out of matching symbols. When the symbol on the first reel and that on the reel above it matches, it automatically drops down a position and rewards the player with cash prize.

On the second and third reel, the same applies. Once the nudge feature is completed, an arrow will pop up above the reel set. After this occurs, there is a reset of the symbol stack and this further leads to a repetition of chain nudges regardless of what reel set it occurs on.

This slot is made up of three jackpots which are the Mini, Midi, and Mega jackpots and each has a payout range of 40x, 200x, and 10,000x respectively. In the Superpot version, the Mini and Midi jackpots remain fixed while the Mega jackpot falls away and gets replaced by a progressive jack. It should be noted however that the local jackpot is not in any way linked to any progressive pool. This is due to the fact that it is being hosted by an individual casino online.

What is the highest prize than can be won on a single spin?

The biggest payout possible on the main game is 7,040x player’s stake with the Mega jackpot paying 10,000x. Coming across a progressive with a maximum bet per spin being £200 is quite rare. To this effect, it is advised to use some discretion.

The volatility of this game can send get you dry and high if you decide to go overboard with it. Although it is not the best progressive jackpot there is, it is still one of the best 3 reels created by NetEnt.