The grimoire itself happens to be a magic book that can be said to be a private journal for a sorcerer. There are different types of occult knowledge which includes spells and some other magical tips and tricks. Some of the folks might probably pick up on an enchanted adventure

The Golden Grimoire only summon the good spirit in the reviews that we do make. Now this is the appropriate time to figure out if the Transformation of the free spin round will definitely spell a lucky streak right on the reels

As we load this slot game, our review team was able to figure out themselves sitting at a desk that belongs to one of the sorcerer by night. It’s actually something really nice when the symbols makes their appearance before the player like they are summoning them right from the depth a of a magical knowledge

When you get around the reels, the symbols in which you will get to see on th reels include that of flickering candles, occult artefacts and ancient books. Of course the main feature of this scenery is a giant rose window which allows a view of the stars and a touch of moonlight as you lend the whole game the glimmer of mystery and magic

The impressive details in the animation and artwork further amplifies the mysterious feel. Part of these include the arcane symbol and they make their appearance on the walls of the chamber having different forms of intervals, there are signal teaser spin and musical spin that are spooky

The pay symbols on this slot are eight, and they are of mundane nature, but then they still have a touch of magical appearance as they are being highlighted with colors and ing the appearance that is fully stacked at almost every time. Looking at the low end, all are card suits which include spades, diamonds, hearts and club

The symbols with the high value looks more elaborate with a gem as it is held by a mystical critter. Looking at the ascending order of the value, they include a purple gem in which a scarab hold, a snake holds a blue gem, a Kraken-like creature holds a green gem and lastly a spider holds a red gem. The moment you can hit 5 on the pay line, you are going to win 0.75x to 5x of the amount you wish to place your bet on. This looks extremely low looking at the maximum win in a single spin as it looks rather measly and 200x of the amount of bet placed

The mystery symbol on this casino is simply the grimoire that has a question mark, of course that's the main actor. The golden skull is simply the wild symbol, and it only makes its appearance anytime it is revealed through the Transformation of the mystery symbol, and it can serve as a replacement for all the scatters and the only exception is the scatter. The design of the scatter is made in such a way that it looks artistic way with a keyhole 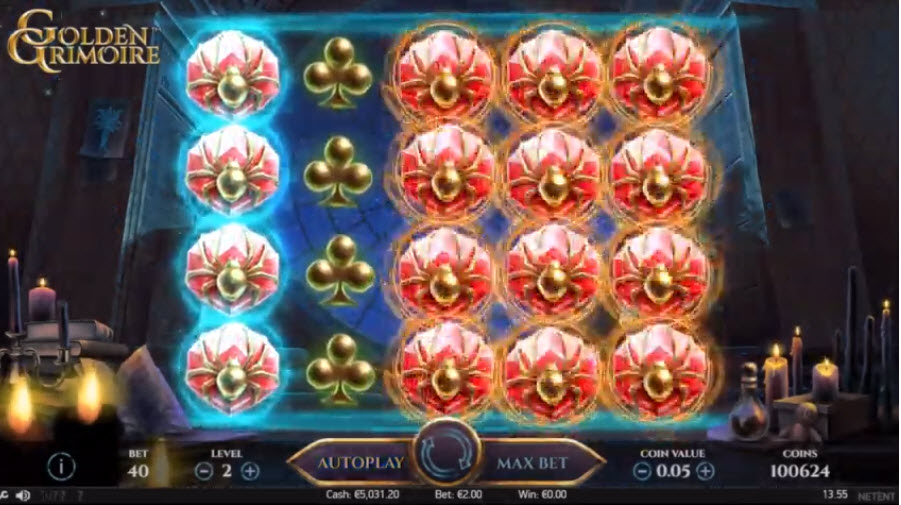 Discover the Number and Stats

There are a reasonable number of appealing features in which the players can get to uncover on the 20 fixed pay lines, four rows and five reels

Provision is as well made for wild symbols that are desirable, and they can be substituted for some other symbols right on the reels so that they can be transformed into a mystery symbol. There are free spin rounds in which the mystery symbol doubles up to become the sticky symbols

The RTP is 96.44%, and this slot can be considered to be a game that is of low variance. Provisions are made for the minimum bet and the maximum, which include 0.20 and 400 coins, respectively. The autoplay feature gives players the ample opportunity to spin the reels without any form of interruption which can be said to be 10 to 500x

Just like the other games released by NetEnt, players are given a chance to play on the go as the games have compatibility with mobile devices

This game is rather bland and is definitely coming to life for brief spell any moment the symbol land on the reels 2, 3 and 4. The moment the dust settles, all will be transformed into a wild or pay symbol

This is the exact place in which the main mechanic will jump right into action. Any moment, in which the unveiled symbol matches the one present on the 1st reels, it will connect to the most transformed symbol from the right and later turn other symbols that are in the same row to matching symbols. All of the symbols are definitely going to change into a wild symbol

For you to get a better pay symbol and amazing wins, you are going to hit a full stack of a symbol on the first reel, and the magic book on the reel 5. Looking at the screen, provision is made for a range of prize as the lowest is 30x while the 200x is the highest symbol

The Transformation Gives you More Win

The gameplay is smooth, and it comes to life after few spells have been made, the mystery symbols are going to land 2nd, 3rd and 4th symbol. The moment the dust settles, all are going to transform into a wild and pay symbol definitely

The free spin round definitely increases the action and the suspense of the game, as it is considered to be the biggest opportunity to make big wins. The scatters can be hit on the 1st, 3rd and 5th reel such that you will be able to trigger free spins which are up to 8

The magic theme is what most people enjoy while enjoying a slot game. Provision is made of a huge selection of magical books

This game is with great design, and it has an authentic and amazing graphics, and it is designed by a reputable software provider which happen to be a NetEnt