The Cash O Matic slot is one game that eventually grows on its players. With 5 reels and 4 rows, it offers a total of 1024 ways to win. 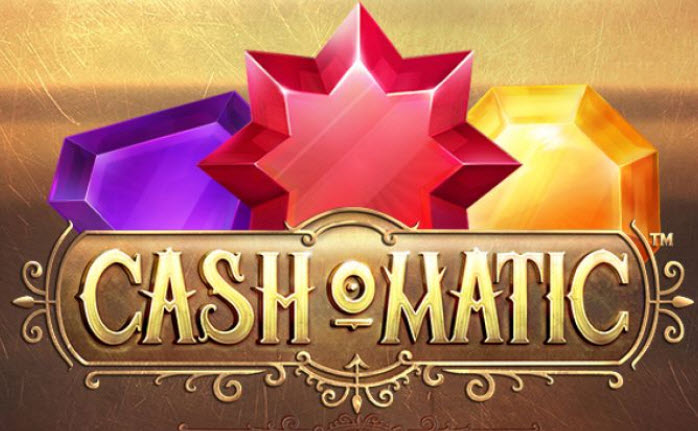 This slot is weird in its own way howbeit, not entirely bad. You might initially become discouraged by its complicated game play and outdated look, but this game is one you do not want to give up on so easily.

The slot makes use of a symbol drop game engine in which the winning symbols are held in place on the reels with new ones falling into place at the same time. This can result into a multiplier of as much as 50x in the Free Spins game. Across all devices, this game is playable from 20 cents to 400€ per spin made.

Cash-O-Matic comes with a rather peculiar music that runs on repeat in the background while the game is on. It is also developed in a way that mimics the antiquated cash machine. It comes with a visual that is highly dominated by gold and has an opulent art design which in all sincerity doesn’t look too exciting.

The symbols that are found on the reels include symbols A, K, Q, J and also 10 royal values. In addition, there are purple, green, blue, red and yellow gemstones. The most lucrative gemstone is the red star-shaped gem and has five of these gems giving players 1x their total stake. Also players do not have to keep track of paylines, this is because right from the first reel, symbols that match anywhere on the grid on 2 or more adjacent reels will always count as a win.

This slot is built around a drop game engine symbol called the Avalanche feature. What this does is, instead of the usual spinning reels, the symbols fall in their rightful positions on the grid. The moment any of such Avalanche results in either one or more winning combinations, the symbols that are winning will stay put on the grid and then drop to the bottom while every other symbol will be removed in order to create space for the second Avalanche. This particular cycle goes on and on until there are no matching symbols left.

The Multiplier feature is activated when a row is dominated by winning symbols. For instance, 1 to 4 rows filled with winning symbols provides players with 1x 2x, 4x, or 10x multipliers respectively.

The multiplier feature has even more advantage when used with the free spin feature. Each scatter gathered acts as a free spin, this means player can begin with as much as 20 or more spins in the feature. This feature can also be re-triggered because each full row you get adds an extra spin to the total. The multiplier level however depends solely on the number of scatter symbols that has been collected in order to trigger the feature.

Based on the fact sheet by NetEnt, no wins greater than 10,000x has been recorded in the process of simulation for 500 billion spins. The maximum potential falls around 2000x players stake.

On the list of the most attractive looking slots that exist out there, the Cash-O-Matic might not be found anywhere close. However, a deep understanding of its potential will help players begin to warm up to it and find this slot really attractive and worth every time spent on it.