Book of Darkness is an online slot game developed by Betsoft Gaming and set to be released on October 2020. It is made up of five reels together with ten bet lines and the minimum stake is 0.10 dollars whereas the maximum is 40 dollars. 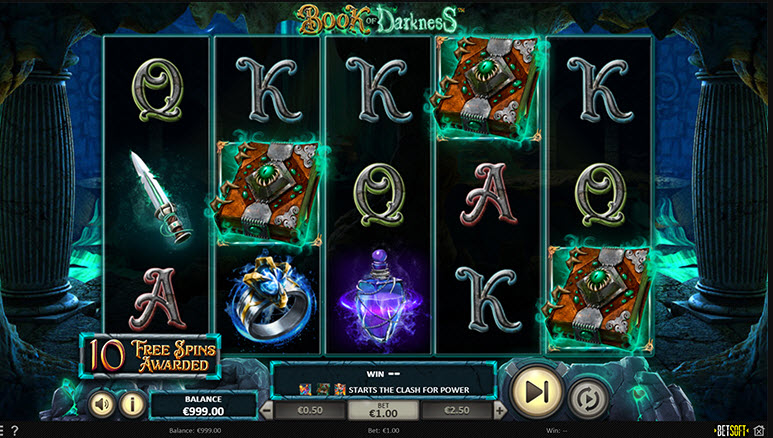 >>Play on Book of Darkness Slot

Betsoft Gaming has developed another slot game and it is called Book of Darkness. The theme of the game is about adventure in which players will be taking to a world of fantasies. There are lot of icons available on the wheels and it is made up of five wheels each containing three icons. There are ten functioning bet lines and it is a high volatile game. The players can win as much as six hundred and forty times their bet. The payout percentage of the game is 96.48 percent and there are lot of features that increase the winnings of the players.

The minimum amount the players can bet is 0.10 dollars whereas the maximum is forty dollars for a spin. When the jackpot session is activated the players can win up of six hundred and forty times their bet which can amount to twenty-five thousand and six hundred dollars. The payout percentage of the game is 96.48 percent which implies that players have high chance of winning.

As earlier stated, there are lot of features that increase the winnings of the players. One of them is the wild icon that can substitute for all other icons on the wheels except scatters. Another icon is the scatter which is represented by Dark Wizard and will activate the free spin session.

Another feature is the Clash for Power which will be activated when one to two combinations are formed on the wheels in a straight line. Players will be given the opportunity to select a fighter. In case your fighter wins you will be given ten spins for free together with additional features.

>>Play on Book of Darkness Slot

Book of Darkness Slot is made up of amazing graphics and designs. The game is adventure themed and there are lot of icons on the wheels that have effect on the winnings of the players. It is a slot game that is fun to play and Betsoft Gaming being the software developer the players can be guaranteed quality software.

The software provider is Betsoft and it is made up of five reels together with ten bet lines. The payout percentage is 96.48 percent and the minimum stake is 0.10 dollars whereas the maximum is 40 dollars.

You can play the Book of Darkness Slots at casinos in which Betsoft Gaming is their software developer and the casino will be licensed.