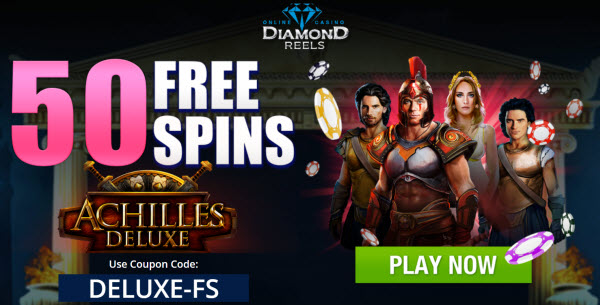 Achilles Deluxe Slot is an online slot game that has real time gaming as its software developer and it is made up of five wheels and twenty bet lines. It was launched in 2020 and contain some unique icons such as scatters and wilds.

In 2020, real time gaming launched another slot game that is made up of 5 wheels and twenty bet lines and it is called Achilles Deluxe. It is about the famous Greek warrior called Achilles that was legendary for his courage and strength. It is an upgrade to a previously slot game with the same name but additional features have been added. There are lot of winning options provided to the player in this game with the potentiality of winning two thousand times the total stakes. Also, another way has been added for the player to cash out big with the inclusion of the jackpots option. In this review you will learn about the additional features that are present in Achilles Deluxe Slots.

It is made up of five wheels and twenty bet lines with the highest amount players can win being two thousand times their total bets. The payout percentage is not yet known to the players. Players can stake a minimum of 0.2 coins and a maximum of one hundred coins. The game also have a small and big jackpot for players together with the free spins session.

The slot game is about a legendary, fearsome, and courageous warrior called Achilles. He was an undefeatable warrior according to the Greek mythology until the battle of Troy. He was defeated and died in the battle when an arrow pierce his heel which is his weak spot hence the etymology for the term “Achilles heel”. The icons are designed to depict the old era.

The background of the game is composed of Troy pictures and the way it was designed illustrate that the event took place in an old era. There is no limit to the amount the players can obtained by playing the game. The estimated amount the player can amass is from two thousand to ten thousand multiply by the bet. The slot also contain 2 jackpot options which are the small and large one.

Some of the characters that are available include Achilles, Helen of Troy, and so on. It also contain the standard cards which are from nines to aces. The shield represent the wild icon which in some cases can be the scatter icon also. Landing a minimum of three of this icon will activate the free spin session. Players can obtain fifteen, twenty, or twenty-five spins for free and their winnings will be multiplied by three. The scatter icon is the logo of the game and obtaining a minimum of there of such icon will make the player receive ten spins freely and the winnings will be multiplied by two. This is lesser than activating the free spins with wild icons.

The size of coins can be adjusted from 0.01 dollars to five dollars. The least amount that can be staked on a spin is 0.20 dollars whereas the maximum is one hundred dollars with twenty bet lines being available. Also play can activate the auto play button which will ensure automatic selection of the wagering option and the spinning of wheels.

Out of ten the slot is rated eight. There are additional features that have been added to the slot game. Players now have the opportunity to land two jackpots to increase their winnings. Also the free spins can be activated in different ways including the landing of Achilles, wilds, and scatters. It is an amazing game by real time gaming and it is worth playing most especially by lovers of Greek mythology.

Gemtopia Slot Review – RTG Online Slots The 16th of August, 2017, saw the release of another fantastic progressive jackpot video slot from Realtime Gaming, called Gemtopia. It is a...

Purrfect Pets Slot Review – Online RTG RealTime Gaming Slots Another of Realtime Gaming‘s online slots from 2017 is Purrfect Pets. This game was launched in the month of April...