The Indiana Jones movie series has gained so much popularity over the decades. Interestingly, the story has been confined to another creation that the players can enjoy on the reels. 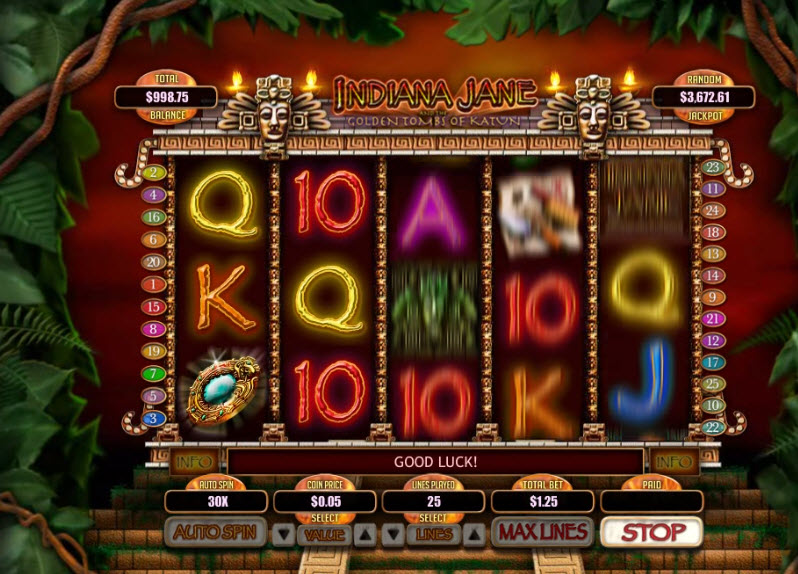 Real time Gaming gave it a thought that they have to do something great, the storyline if this heroine was taken to the 5 spinning reels using an adventure theme. There are lots of progressive jackpots and there is no need for you to make any download.

One of the popular icons in the series is Jane and we can as well see Lara Croft. Having said this, we can say that the slot runs in a parallel line to the Jones movie series. The moment you start the gameplay, you will observe that the gameplay is according to the earlier stated movie series.

Provision is made for an amazing sound effect, but then it does not inspire you, you can always turn it off. There is a congruous theme on this slot as the reels sit like a temple on the steps made with Ancient stones.

Unfortunately we met some disappointment in the cause of examining the game, we have observed that it made use of symbols that pays really low and too simple. The symbols are too simple such that no attempt was made to jazz them up. It will be cool if there can be a higher payout symbol. The higher payout symbols include Jane, the Assistant, explorers, and the tools.

The majority of the titles released by Realtime Gaming have something very unique in common which is the simplicity. There are up to 3 rows on this 5 reel slot and the active pay lines range from 1 – 25 and the value of the coin as well ranges from 0.01 to 5.00 and the maximum bet you can enjoy is 125.00 which can fetch you up to 2500 coins. There is a paytable which will show you the symbols, payline and some other functions.

The completion of a game that depicts the adventure of an explorer should be with a wild symbol. The logo of the game is the wild symbol on this slot and it can be substituted for some other symbols so that you can get win multipliers.

Players can decide to pick up three of the tomb scatters and a double pick will be given in the bonus game which can either be in the instant win or the scratch card. Any time you see the appearance of three scatters, you are to pick one of them and determine the picks that you are going to get as you enjoy the bonuses, after then you will be taken to the Tomb spheres in which you will be able to use your choices in a very wise way. Jane can as well give you a 2x multiplier on the reels.

One interesting thing about this game is that you will keep anticipating lots of excitement and explore the more as you will get a lot of treasures as you enjoy the progressive jackpot.

There are some things that Realtime Gaming will have to fix on this slot to make it more appealing. Although the animation and graphics are quite alright, but then the theme and gameplay should be done in a better way. The cash prizes can be offered to the players in the form of a progressive jackpot.