A Video Slot machine developed by NetEnt, with the theme centered on some adorable animal, featuring a progressive jackpots & bonus features, arranged on 5-reels & 25 pay-lines 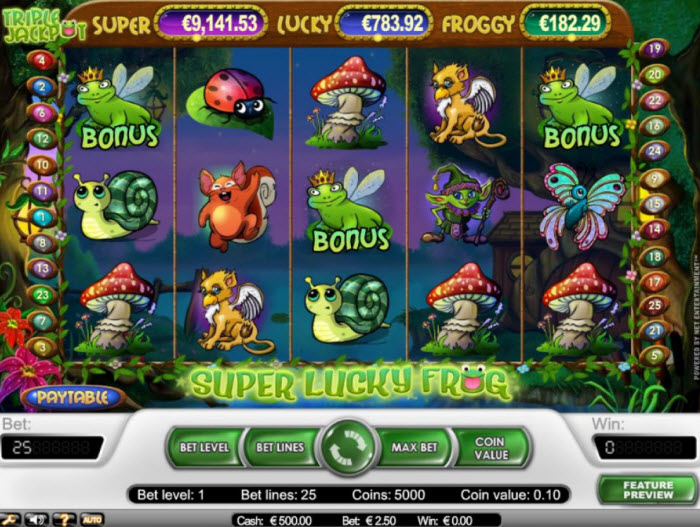 The concept of programming the story-line of a slot game on some adorable animal is quite a common approach among software developers in the gaming industry. NetEnt thereby contributes its part & also includes its idea to the same theme programmed inside this game tilted “Super Lucky Frog.”

This game is a woodland-structured slot alongside several best-rated visuals & progressive Jackpot included.

This slot machine encompasses five-reels, 25 pay lines, arranged over a casing made of flowers whereby we got to perceive an impression of a clouded sea beneath a sky-colored purple. It's dark hours in the woods & features light from the opening of a mini-hut.

The characters include mysterious & to an extent, non-mysterious life-form, encompassing a ladybird, a butterfly, a squirrel, a snail, a toadstool, kinds of improvised dog, a small elf & a pegacorn.

The exclusive characters include an elf wild, a rapid frog bonus. Likewise, fairy scatters such that its able to activates the bonus spins.

Aside from the game generating satisfactory winnings as a result of making visible scatter characters, it as well turns on the bonus spins round. Whereas 3, 4, or 5 fairy characters can score 10, 20, or 30 spins accordingly.

Perhaps you strive to put this to action; then the spins can start-up bi itself without any control & the worth of whichever winning combinations which appear can get it magnified in three-fold. Furthermore, while you make visible extra scatter symbols, it further generates additional bonus spins to the initial.

The progressive Jackpot establishes high potentials to obtain among the three prizes on offer in this slot machine, ranging from little to high worth, designated as Froggy jackpot, Lucky Jackpot, lastly Super Jackpot.

Three of the frog bonus characters across the running pay line can make way to gain access to the game & acts as a Wheel of Fortune visible across the right.

While you make visible golden ‘1', it can generate the sum provided in the upper part towards the right-hand side. The greater the bets, the higher the chances a player can make enormous prizes.

This game offers an enjoyable, tranquil setting & highlights top-notch visual artworks. Most importantly, the system runs a progressive prize that exists as a great advantage for players & contributes much fun.