The Hive Slot is an online slot game developed by Betsoft Gaming. It is made up of five reels together with thirty bet lines. The payout percentage is 96.97 percent and the minimum stake is 0.10 dollars whereas the maximum is 90 dollars. 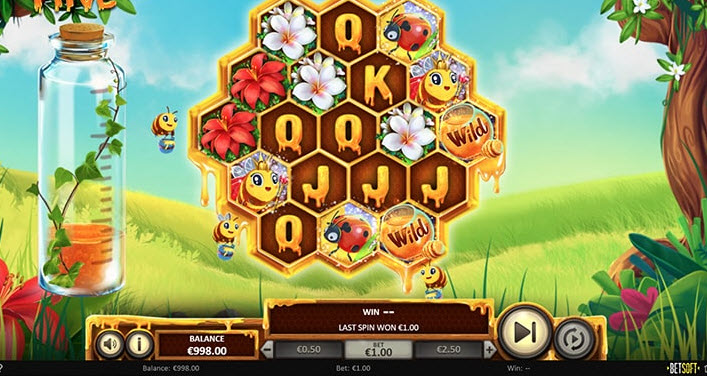 >>Play on The Hive Slot

About The Hive Slot

In 2020, Betsoft Gaming released another new slot that was called The Hive. The theme of the game is about bees taking players to their habitat and turning this into a game of wheels combine with the standard bet lines. There are lot of options available and the designs of the game is amazing.

It is made up of five wheels and thirty bet lines. It also contain some symbols that increase the winnings of the players such as wild, free spin sessions and so on. The players have high chance of winning with the game having a payout percentage of 96.97 percent and the go away with as much as thirty thousand two hundred and forty dollars.

There are options for staking given to players as low as 0.10 dollars and as much as ninety dollars for a spin. The players can go away with as much as three hundred and seventy-eight times their bet which will amount to thirty thousand two hundred and eighty dollars.

The theme of the game is about a bee and the icons are arranged into 5 rows and there are a sum of nineteen icons altogether. There are thirty bet lines offered to the players and they will be required to form a winning combinations on it. The winnings of the players is dependable on the icons they land and the features they activate.

At random three bees which are the drone bee, worker bee, and queen bee can appear which will activate some sessions. The free spins session will be activated by the drone bees in which the players will be awarded five spins for free. There is a wild available to players also which will help increase their winnings. The wild can also replace all other icons on the wheels to form winning combinations.

The graphics of the hive slot is amazing and the theme of the game is about bees. There are lot of icons available on the wheels such as honey, red flower, white flower, and a lot of flies. The bet lines of the game is thirty and made up of five wheels.

Betsoft Gaming is known for developing quality slot machines that will suit all caliber of players and of those slot is the Hive. It is full of enjoyment for players.

The software provider is Betsoft and it is made up of five reels together with thirty bet lines. The payout percentage is 96.97 percent and the minimum stake is 0.10 dollars whereas the maximum is 90 dollars.

Can the Hive slot be played without real money?